GOING BEYOND THE BAG 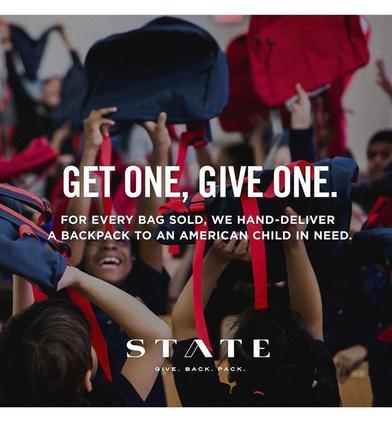 STATE was created to address the immediate needs of American children living with challenging – and in some cases critical – circumstances.

For every STATE bag purchased, STATE hand-delivers a backpack – packed with essential tools for success – to an American child in need; but our commitment goes beyond simply a material donation.

STATE BAG DROP EVENTS are where the real impact is made. Our team of “PackMen” and “PackWomen” lead motivational rallies that leave participating kids with a renewed spirit and belief in themselves (not to mention brand new STATE backpacks).

STATE Bags is proud to be a Benefit Corporation, accompanied by fellow companies creating public significance by having a material, positive impact on society.

STATE began as a partnership between husband and wife team, Scot and Jacq Tatelman. They created STATE as a for-profit company with a nonprofit pedigree.

These Brooklyn-based social entrepreneurs have eyes trained for style but their hearts have always been with kids growing up in America’s most underfunded neighborhoods.

In 2009, they founded Country Roads Foundation – a nonprofit organization that has served thousands of New York City kids.

After watching countless kids carrying their possessions in ripped trash bags, Scot and Jacq formed STATE – a company that promises to not only deliver much needed supplies, but to also provide youth with the tools to reach their fullest potential and better their communities. And to always have their backs.

Scot and Jacq live in Brooklyn with their two children, and their dog Pokey.

Here is our interview with Scot Tatelman, Co- Founder of STATE.

What was the motivating factor behind starting Country Roads Foundation? And what has the organization achieved since it’s beginnings?I ran a summer camp in Maine for years and have forever been camp guy. At the end of every summer, we had this incredible space that went empty for weeks before the cold weather hit…it just didn’t feel right to me. So in 2006, I put together a one week, overnight program for 150 kids from the inner cities of Boston. We partnered with the Mark Wahlberg Foundation, and Boys and Girls Clubs in the area in creating Camp Northbound. I’m insanely proud of the fact that 11 years later, it’s still going strong and has served thousands of kids who never would have had this experience if not for this program.

I decided to make a career change in 2007 and moved to New York where I got my feet wet in the nonprofit world. I learned a lot, but got the itch to start my own thing, so decided that I would take the model from Camp Northbound to serve a different population of kids in high need…thus, creating Country Roads Foundation and its signature program, Camp Power. To say that it’s far surpassed my wildest expectations is an understatement. My friends serve as dedicated, committed staff members, continuing to come back year after year, we started at 68 kids in 2009 and now send over 200, and we’ve seen campers turned CIT’s turned counselors. The dream has officially become a reality, and the program gets better every single year. It’s hard to describe how magical Camp Power is…you just gotta experience it for yourself!

From there, STATE was born, can you tell us more about how it’s not just a backpack but more giving kids the tools to reach their fullest potential?
The story behind STATE is that we started to see kids coming to camp (and throughout the school year) carrying all their belongings in trash bags, and it tore us up. We wanted to do more for these kids, but in a way that built upon the one for one model so it would be more than just donating bags as we knew material handouts like bags wouldn’t change a life. Each donation would carry a stronger message, delivered by positive role models who have walked in similar shoes as the kids we serve. That’s what our bag drop rallies are all about as they’re basically a motivational rally mixed with an educational workshop blended with an off the handle dance party. So we come with not just a backpack, but a #GiveBackPack.

What is the backpack essentially symbolic of in your eyes?

We talk a lot about the backpack being a key part of one’s life journey, and what you carry in your bag telling a lot about who you are, where you’ve been and where you’re going. We do an exercise at our bag drop rallies called “what’s in your bag?” where our PackMen/Women share personal stories of what they’ve carried (and still carry) in their bag that’s helped them get to where they are today, successfully rising from similar neighborhoods and challenging upbringings. You can always hear a pin drop when they’re talking, and we’ve been lucky enough to welcome big name celebs at our drops, who have also shared with the kids. It’s awesome, and always my favorite moments from the events.

Has there been one standout moment when you realize just what a difference you were making?

I’ll never forget at our very first bag drop in Red Hook (before we even had sold one bag), a little girl got her new STATE Bag and immediately started pulling everything out of her old, tattered backpack and into her new one. She was beaming. Jacq and I just looked at each other with tears in our eyes.

For me though, it’s less about the moment the kids get their new bags, and more about watching the kids vibe off our PackMen/Women throughout the program. They are child development specialists who get the kids laughing, dancing, thinking and motivated. Seeing them see themselves in our PackMen/Women is why we built the program in the first place, and watching kids ask for autographs at the end speaks volumes.

How many children have you so far helped?
Tens of thousands from across the country in the country’s most underserved communities. Super proud of that!
What are your plans for STATE going forward?
From a product perspective, we want to be synonymous with backpacks. To be the go-to brand for someone who’s looking to buy a great looking, well made, super cool bag for themselves or members of their family. We’re on the right track as the current and new product in the pipeline is insanely awesome…back to school is going to be very fun!
From the charitable perspective of the company, I personally want to be a company that continues to evolve our one for one model, so we are focused on way more than just donating product to kids in need. Our#WhatDoWeTellTheKids Initiative was built to combat social injustices in sharing stories and imagery of people living in embattled situations. The world needs more empathy right now, and I believe a big way of building that is forcing others to walk in someone else’s shoes. More to come with future projects, and I’m excited for people to see and share it all.
What does Kindness & Hope mean to you?
For me, kindness is so simple…it’s taking the time to understand, sympathize with and show openness to someone else. I wrote a letter about it and how I’m trying to teach my kids, which we blasted out to our email list to kick off 2017.

There are no reviews yet.

Be the first to review “STATE” Cancel reply