The two men behind the Jerusalem Prayer Project, a multimedia platform for musicians, filmmakers, artists and activists, recently embarked on a ten-day trip to the Israel/Palestine, where they had the opportunity to meet and interview many extraordinary individuals working on a grass roots, person to person level, to achieve reconciliation between Palestinians and Israelis.

What became crystal clear to them, was the role women have been playing in building a new movement to end the conflict in the midst of a highly patriarchal society. 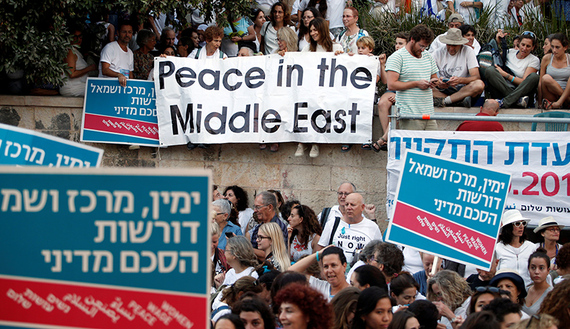 They say: “Women are standing up with courage, dignity and strength, acting from their hearts, speaking truth to power, walking their talk, exemplifying the spirit of Warriors of the Heart across the holy land.  Huda Abuarquob, a Palestinian peace activist, is Regional Director of the Alliance For Middle East Peace and a leader of the Woman's March for Hope, which brought tens of thousands of women together from Northern Israel to Jerusalem over the course of 14 days and 150 miles last October, 2016. The march culminated in a massive demonstration in front of the Prime Minister’s residence, calling for a restart of Palestinian/Israeli peace negotiations.

Previous StoryWhen justice is NOT served: Jeffrey Deskovic spent 16 years in prison for a crime he didn’t commit
Next StoryHow Ovarian cancer inspired a passion for fashion