Growing up, Tiffany Wedekind always knew she was different.

Petite like her mum, she never questioned her build, but when she started to lose her teeth and hair in her early 20s, she was sure there had to be an explanation.

It wasn’t until her older brother, Chad, became ill that she finally got some answers.

Here, she tells her story in her own words to That’s Life! …

Getting behind the wheel of the car, I was buzzing with excitement.

We’d always been incredibly close. Even when I was a young kid, he never complained about playing Barbies with me!

And no matter how many years passed, Chad was still fiercely protective of me.

Unlike our older brother, Todd, then 24, who was tall, dark, and broad like our dad, Michael, Chad, and I were short with wispy blonde hair, like our mum, Linda.

Nicknamed ‘Lil’ Tiff’ by my parents, I never questioned my petite build.

Then, after I hit puberty, I noticed I wasn’t developing the way my friends were.

While they loved painting their nails, mine were too weak to grow, so I glued on fake ones instead.

Deep down, I knew I was different, but I couldn’t put my finger on why.

By the time I turned 25, my teeth had started to fall out and my hair was thinning. My nose and jawline had also become more refined.

I’m still so young, I thought, embarrassed by the changes.

Having seen various doctors over the years, they all admitted my symptoms were strange, but none gave me any answers.

Despite everything, I knew that I was still the same optimistic, bubbly person I’d always been on the inside.

Then, when he was 30, he underwent open-heart surgery after suffering cardiovascular issues.

But doctors weren’t sure what had caused them.

It wasn’t until he settled down with his partner, Julie, and decided to start a family three years later, that he began fighting for answers.

‘Whatever this is, I need to find out,’ he admitted.

So, he asked me and Mum to undergo genetic testing along with him to get to the bottom of his mystery condition.

‘We’ve discovered you have progeria,’ the doctor revealed after.

The condition causes rapid aging, up to eight times faster than normal.

Suddenly, all the physical challenges Chad and I had suffered since childhood made sense.

We also learned the rare condition had been passed down to us through our mum, despite her not having any symptoms herself.

But nothing could have prepared us for what the doctor told us next.

‘Most patients with progeria don’t live past 13,’ he said, explaining that sufferers often succumb to a heart disease called arteriosclerosis.

At 28, I’d already more than doubled the life expectancy of most children born with the condition and hadn’t experienced any problems with my heart.

For Chad, the news cut deeper as his heart was already growing weaker.

Despite the challenging news, we’d already defied the odds, so we tried not to dwell on the future.

In fact, not knowing how much time we had left, made us appreciate every single day that much more.

Channelling all my energy into living an active lifestyle, I practised yoga daily and danced any chance I got.

Incredibly, six years later, in May 2011, Chad and Julie welcomed their son, Kenny.

I’d never seen Chad happier. Then, just four months on, he wound up in hospital after a sore on his toe refused to heal and caused an infection, which spread throughout his body.

‘I’m not going to make it to 40,’ he told me from his hospital bed. ‘Live your life to the fullest and do whatever makes you happy,’ he added.

Sadly, his heart just wasn’t strong enough to fight the infection and he passed away, aged 39.

I was devastated but determined to hold on to the promise I’d made to my brother.
Up until then, I’d tried to conceal my diagnosis, in fear people might treat me differently.

Standing at just 134cm and weighing only 26 kilos, people had often picked on me.

But I realised I needed to stand up for myself and show others just how resilient I could be.

I’m going to tell the world who I am, I thought, proudly.

Incredibly, after announcing my condition on Instagram, I was contacted by a media company just two days later who wanted to make a documentary about my life with progeria.

‘I don’t let my disease define me,’ I told producers.

Afterwards, I felt like a weight had been lifted from my shoulders.

At that point, I also decided to quit my job.

Then, I opened up my own cleaning and candle-making businesses.

By staying true to myself and not letting my condition define me, I’m more confident in my skin than ever before.

Last year, I was able to have my first pair of dentures fitted which has boosted my self-esteem.

I’m not only the oldest living person with this rare condition, I’m also thought to be the oldest survivor of it in history.

There’s not a day that goes by where I don’t miss Chad, and I’m determined to live a life he would be proud of.

While others might think my condition is a hindrance, I know that I was born to stand out. 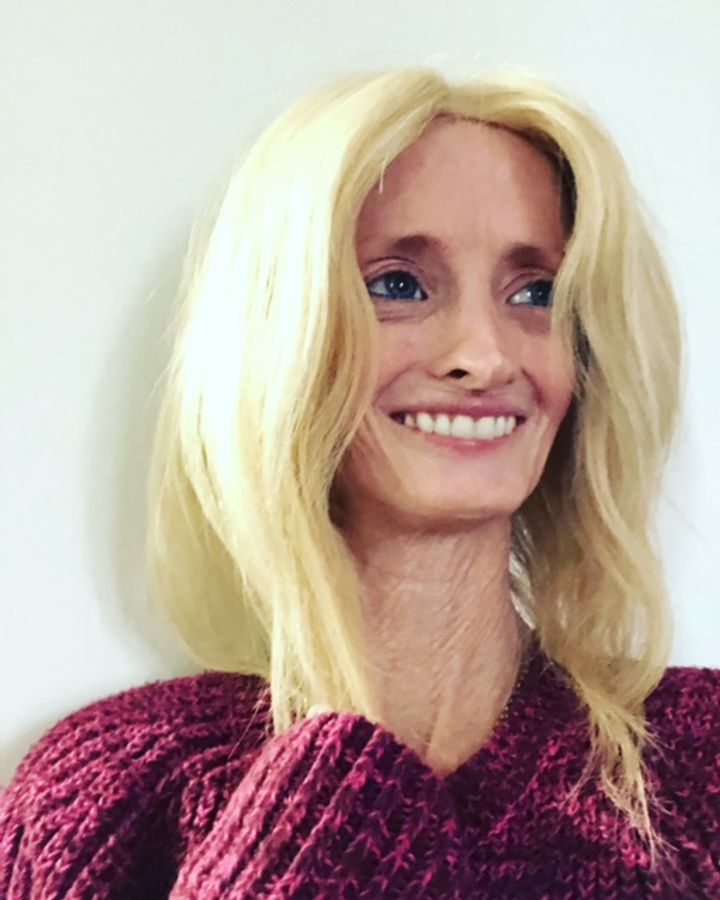 This story was republished with permission of  That’s Life! a wonderful source of inspirational stories. Previous StoryA sweet Slater update: How the 6-year-old is living out his dreams in his final months
Next StoryHelping victims of NSW storms and flooding rebuild their lives