Back in April of this year, we started documenting the story of Marian McGlocklin, the then 18-month-old who was diagnosed with a fatal genetic disorder called Niemann-Pick disease type (NPC), which is sometimes referred to as childhood Alzheimer’s.

Over time, NPC, children slowly lose the ability to move, eat, speak or even breathe.

Marian’s parents, Paul and Sara, started to raise funds to not only save their little girl, but also to help fund research for others who were suffering from the disease.

Fast-forward to October, and Marian, now 2, has shown a vast improvement.

“Marian is doing really well, it’s like someone helped shine a light for her,” her, mom, Sara tells Kindness and Hope. “Every day we see her becoming more and more of who she is meant to be. She’s walking around now, able to climb up on things and is getting so much stronger every day. She’s also understanding a lot more language and is almost caught up there. 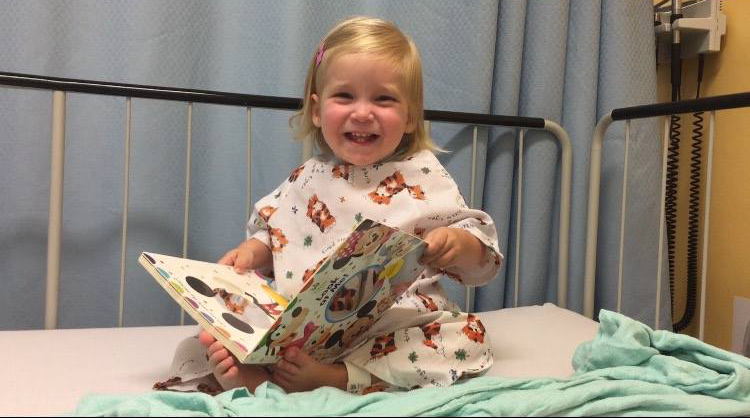 “The developmental delays are still there but she’s starting to close the gap in many of the areas, our hearts are still hopeful that she will be able to catch up with the help of the experimental treatments until a cure is found. But, we also know that right now, as it stands today, there isn’t enough science for her to survive NPC. Which is a heartbreaking reality to face, especially when we see her doing so well. We are dedicated and committed to doing all we can to help her and others with NPC survive.

“Scientists are urgently working on a cure or advancing treatments, and every day that we can go faster and every dollar that we can raise for a cure is going to make a difference in helping to save Marian or another child fighting NPC. Right now we have two campaigns going: the first is The No Pucker Challenge – taking a bite of a lemon, videoing it, and challenging friends who either keep it going or donate $10; and Riding for Marian – a nurse in Florida who is cycling across the state stopping at hospitals, taking the No Pucker Challenge along the way, and working hard to raise awareness and a cure for NPC from Nov 1 to 4 – www.hopeformarian.org/ridingformarian.org, all donations from both events are going straight to research to advance research for a cure.”

Watch the powerful video of Marian below:

Previous Story‘Unless someone has danced with death, they don’t realize that life, in itself, is the most precious gift on earth’: Catching up with breast cancer survivor Robin Lagrassa
Next StoryThe #MeToo movement is women’s watershed moment: How you can help create long-lasting change