In 2001, Kate Walsh’s eldest son was diagnosed at age two-and-a-half with PDD-NOS, an Autism Spectrum Disorder.

“Our journey with autism began when I took our daughter to the pediatrician for her six-month check-up,” Walsh told Westchester Magazine. “I had just dropped off James, two-and-a-half, at daycare and noticed that his classmates were speaking in sentences. James mainly said one- or two-word phrases: ‘water,’ ‘Play-Doh,’ ‘outside.’ I asked the pediatrician if I should be worried. He assured me that kids learned to speak at different rates, but, if I was concerned, I should call Early Intervention. I called and left my information.’”

Specialists from a local school for early development would then come to evaluate James, and after two hours, they told Kate that they thought “James had autism.”

The news turned the family’s world upside down.

“Up until that point, everything was on track for the life I’d always envisioned,” Kate explained. “I was married, had a great job, my husband and I owned a house in Westchester, and we had two beautiful, healthy children. Now, a pediatric psychologist, sent from Early Intervention, had drastically altered my dream.”

Kate called her husband in tears but set about to learn as much as she could about the disorder which according to 2018 statistics affects one in 38 among boys (or 2.7 percent) and one in 152 among girls (or 0.7 percent) in the United States.

While there currently is no real cure for autism, science and research are making advancements by treating medical conditions that aggravate autism symptoms which improve the child’s health and general well-being.

And, in terms of research into autism, James younger brother, Benjamin, has had a significant role to play.

On World Autism Awareness Day on April 2, Kate posted the following to her Facebook page detailing the extensive lengths her younger son had gone through in an effort to help others. 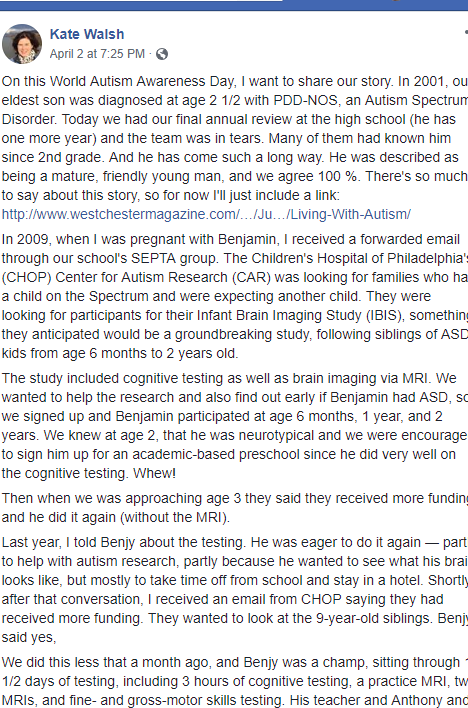 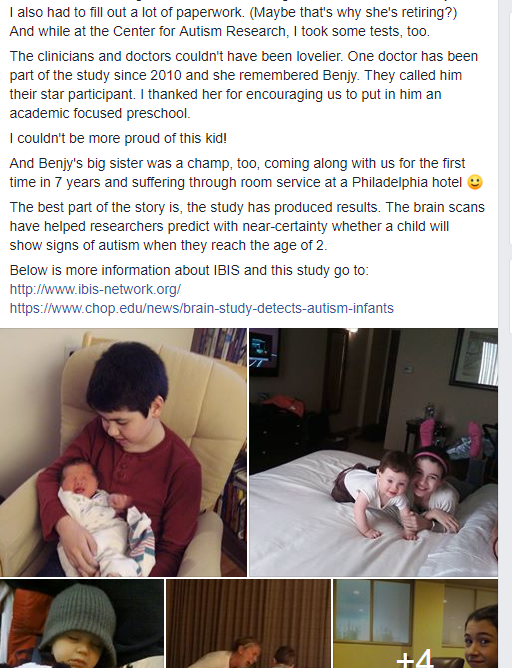 Kindness and Hope caught up with this remarkable family rallying around each other, and others.

Kate says that the research Benjamin participated in was “very significant, going forward for children who have autism.

“The goal of the study is to identify very early brain features that may be characteristic of autism,” she says. ‘The information may help improve methods of early detection and intervention for infants who may be at risk. There is no known cure or cause, but research has shown that early diagnosis and treatment can significantly improve the quality of life of individuals with ASD as well as of their caregivers and families.”

When we asked how Benjamin, now 9, felt about taking part in the research program, he says: “It was cool. I felt good. My mom says it will help babies who might have autism. I feel good about that because I’m helping people.”

And, another upside of his efforts?

“The best part of the trip to Philadelphia was the food,” he says. “It was also great meeting the people who worked at CAR (Center for Autism Research at the Children’s Hospital of Philadelphia) and watching the movie they played during the MRI.”

When Benjamin isn’t out there already making a positive impact on future lives, he likes to “play video games, read, draw, play with friends. Ride my bike, play sports like lacrosse, baseball, and basketball.” He also enjoys horror movies, “even though I’ve actually never seen one.”

As for what he wants to be when he grows up?

Benjamin explains: “I want to be an artist or a professional athlete, lacrosse player, basketball player or baseball player.” 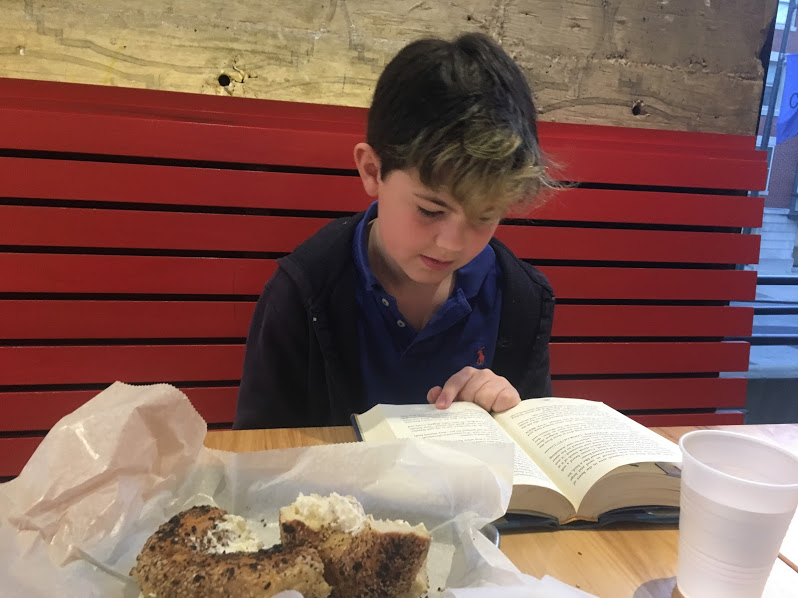 Benjamin describes his older brother James, who prefers to go by the name J.J.: “He’s irritated by a lot of things, like me making noises and getting too close to him, and when I tell him to stop talking so loudly when I’m trying to read.

“He’s nice to me and my friends. He sometimes walks me to places like my Cub Scout meetings or stays with me at school dance parties.”

J.J. for his part is doing well. Now 20, he will be in his last year of high school next year, spending part of the school day in a culinary program at a farm/restaurant owned by the county.

“He also spends some time doing vocational work,” proud mom Kate explains. “He has worked in three restaurants in our town as well as the senior center, which he loves.”

“I like the culinary tech school that I go to for part of the school day,” J.J. says. “I like seeing friends at both culinary and the high school.”

And when he isn’t at school, J.J. likes things pretty typical of someone his age.

“I like looking through photos on my phone,” he explains. “They remind me of happy times with family and friends. I also like to send them to people and post on Facebook. I like to draw sometimes. I used to like it more in elementary and middle school. I also like to go dancing parties, going to my friend Darlene’s house, and having friends and relatives over to our house. He also likes to hike, bike, and go to New York City and amusement parks.

When asked what makes him happy, he responded; “Spending time at my favorite places, especially when I can be there by myself and spend as much time there as I like.”

He concedes that he’s not sure yet what his vocation will be, but hopes “it’s something I really like doing.”

Kate describes both boys as being very different personality-wise.

“J.J. is loving, caring, conscientious and a rule-follower,” she says. “He has anxiety, which is very common with people with ASD, and it can sometimes overshadow his personality. When on vacation, it’s sometimes hard for him to enjoy himself because he’s always worrying that he won’t be able to do everything he loves. It’s very hard for him to live in the moment. He can also be very rigid because of the anxiety. For example, when he was younger we had to drive a certain route to the grocery store. He would have a meltdown if we did not. As he’s gotten older, he’s become more flexible because he understands how the world works; heavy traffic may result in us not taking that route. He doesn’t like the way the world works and sometimes he gets very angry about it, but it’s better than it used to be.”

She continues: “Benjamin is outgoing and confident. He is not afraid to talk to adults like his siblings were at his age. He can also be very goofy, quick-witted, and cuddly. He is also an artist, like his brother and dad. He is very proud that he was chosen to be a Lego Creative Crew member at our local Legoland Discovery Center.”

Her advice for any parent who has just discovered that their child has autism?

“Do everything you can to learn about it and get help,” she says. “Do not be ashamed of your child or feel guilty. It is up to you to be your child’s advocate, so you need to reach out to other people. I learned so much by just sharing the fact that J.J. has autism. And I like to think I have helped other people, too. I don’t tiptoe around this. Usually, parents suspect it, but don’t know what to do or are looking for any sign that it isn’t true. I went through the same thing. When we suspected a speech delay we kept hearing, ‘Oh, boys are always slower than girls.’ People just want to make you feel better, but what they really should do is tell you to get help, just in case.'”

Her hopes for all three children (her daughter is now 18) are simple: “I hope they discover their passion and are able to make a living doing it. I hope they find love and know how to make someone happy. I hope that they try to make the world a better place and look out for the little guy.”

The magazine editor says the most important lesson she has tried to impart on all three of her children is “love one another”.

She explains: “When I was growing up, we spent every Thanksgiving with my relatives at their cottage. It is one of the happiest memories of my youth. There was a sign in the kitchen that read, “Love One Another.” It’s a very simple message, but it was a great reminder, especially when the nine cousins were running around trying to kill each other. We grew up and got our own homes, and one Christmas, my sister had similar wooden plaques made for me and my siblings. It hangs in my dining room now. To me, it’s not only a reminder to love each other — our family members — but to love our fellow humans. Be understanding. Be forgiving. Be empathetic. Sometimes people are just having a bad day, so cut them some slack.”

Judging by her family, we think she’s accomplished her mission of instilling love into their hearts and souls.

To learn more about the study Benjamin participated in for the Center for Autism Research (CHOP) click HERE.
For more information about IBIS, click HERE.
Photo credits: The first two family photos and the one of Benjamin and J.J. courtesy of Kevin Walsh http://mmdphotovideo.com.

Previous StoryAn ‘Army of Hope’: Advocates for ending homelessness come together in L.A. to create change
Next StoryHow far she’s come! A former female veteran who was sexually abused & ended up in a psych ward turns her life around: Read her inspiring story