After the busy holiday season, the Interfaith Sanctuary in Boise, Idaho, received a letter and were completely struck by the sweetness and giving spirit of a young boy.

It was a letter that touched them all.

Those at the Interfaith Sanctuary have since contacted the little boy who wrote it and thanked him. But it is so many who are thankful for the shelter –  which provides a safe overnight emergency housing for up to 164 men, women and families with children – for giving them a second chance at life.

Benson is one such man and his courage in the face of so many obstacles is an inspiration.

He was born and raised in Louisiana.

“It was just growing up, like everyone else,” he explains.” I have two sisters and four brothers. One died at six months but that was before I was born. Louisiana was hot and humid. We had fun times. Everyone in the neighborhood knew each other. We’d go in the backyard and climb trees you know just doing everything our mom told us not to do until she got home. I was raised Pentecostal so it was pretty strict. I guess they call it the Holiness Church. They believe in speaking in tongues and shouting. It’s a lot different from churches today. Some of it is smoke and mirrors but I still hold on to the beliefs. I’m just trying to find my place in the world and where I fit in. I’m still looking for the truth. There’s more to it than what it seems. We didn’t do much but summertime was fun. We weren’t supposed to let anyone in or open the door for anyone but we’d let our friends over. We really wouldn’t let them in the house but we’d go play outside. My mom was pretty strict. She wanted to give us the type of childhood she didn’t have but at the same time she couldn’t. She did the best she could you know. She went to work every day and kept a roof over our heads.”

But for Benson, he struggled at school.

“I kind of lost interest in school while I was in high school,” he says. “I didn’t have any encouragement. It was more like you need to, and not why you should do anything. I was kind of a loner. I had friends that I would talk to, people that knew my name but no one I could trust. I fell behind. I’m the sixth child. There’s about an eight year difference between my closest brother and I. When he was a teenager he had that father figure mentality because none of us really had our dads around. I never really knew my father. I talked to him a few times in my early twenties but then lost touch. My brother was always trying to teach us things and teach us to be adults but it never really worked out because he was trying to do his own thing. All the kids ended up getting in trouble of one kind or another. My mom worked at a dry cleaners. She always had that same job and she worked long hours. Most days she’d go in before we even went to school and come home two or three hours after we’d get home from school. I used to love the rain and playing in puddles. I hated the heat and had a fascination with hurricanes. It flooded a lot. Water would be at least up to our porch and we’d stand out and watch people swimming in it. We had an irrigation ditch in our backyard and we’d go back there and get crawfish and boil them up. Those were moments I’ll never forget.”

Those idealistic moments that portrayed the innocence of childhood, soon became a thing of the past as he delved headlong into a world of drug and alcohol abuse. He thought a move from Louisiana would save him from addiction.

“When I was 16 we moved to Washington State,” he recalls. “My oldest sister lived there with her husband and kids. Her husband was in the Navy at the time. We bounced back and forth a few times between Washington and Louisiana. The last time I left Louisiana I was thinking I would get away from drugs and alcohol because I was sick and tired of it. I went to Washington and, within a year, ended up in the hospital. About a year and a month later I was right back in the hospital and it was then that the doctor diagnosed me with Schizophrenia and Dementia. After that I was alone for a while. I just kind of felt lost and if I was going to do this by myself I guess I decided to do it. I wanted to go back to Louisiana and decided I’d try to hitchhike back. This lady I knew from my church in Washington was going to Nampa and she gave me a ride. When she was going to go back to Washington she asked me if I wanted to go with her and I said I wanted to stay in Boise. This was the end of August and into September, 2008.”

He soon found himself without a roof over his head.

“When I was in Washington, I kind of had some help with my medical issues,” ebenson explains. ” [The state] helped me pay the bills. At that time I was trying to get into school and I was really trying to make something better with my life other than just doing fast food jobs. But there were times when I wouldn’t go to work for many days on end. There were times when I was at work but my mind would go blank and it would seem like the first day all over again. Somehow I managed to get into a place all on my own and keep it for eight months. My landlord wanted to work with me but being in that place all alone wasn’t good for me. I’d gotten pretty deep into drugs and alcohol. Nobody really knew what was going on with me, they just thought I wasn’t myself so my mom finally broke down and told my landlord about everything. She was a pretty cool lady. I thought that was the only thing that would make me feel better. I stayed with my sister for a few days. I couldn’t take it anymore. I went to her eldest son and told him that if anyone asked where I am, just tell them I left. That was when I went to Boise. The drugs and alcohol really weren’t doing anything for me. Alcohol, marijuana and LSD were my medication. I was smoking marijuana just to smoke it and try and get better. It didn’t help. After a while, once I started smoking then the voices would progress and get louder and get out of control. I didn’t know of too many options. People kind of downcast you. I had some friends but a lot of them looked at me like I was nothing to them. I’d see them and they’d act like they didn’t even know me. There was a time when I was extremely suicidal. I felt like the only option I had was to kill myself or find something else to do.”

But there turned out to be hope for Benson when things appeared to be utterly hopeless.

“I guess I figured out something else to do,” he says. “In Boise, I was just trying to figure out how I could get better without going to other people for help. I felt like nobody was helping me the way I needed to be helped. Within the first few months of being in Boise I came into contact with Sanctuary. I was staying at the Mission and would come into [Corpus Christie House] every so often. The people there would talk about Sanctuary and it seemed like the better decision for me to stay there. At Sanctuary, you could have the time to be free and have a job. It was a place to be, regardless of your situation. I am a different person today. I’m still a little lost but things are picking up. There is always a sense of trying to be normal. That is my main goal, to be normal.”

And get sober, too. Something he has managed to do.

“Last year I quit drinking and doing drugs. I just got a letter from CWI accepting me into their school,” he says. “There have always been a lot of things I want to do with my life and how I was then, I couldn’t really accomplish anything. I was always paranoid, always scared that something bad was going to happen to me. I wanted to pick myself up or get picked up and get back to a normal life. There a lot of things that interest me. Now I want to go school and see where that takes me.”

Benson's story is just one of countless whose life has been turned around thanks to the efforts of the Sanctuary. Now, they need your help.  They desperately need disposable bowls, plates, solo hot cups (for coffee) utensils and laundry detergent for High Efficiency washers.

They have an Amazon wish list to make it easy. Simply go here and help the organization get the things they need most to help others. To become a recurring donor or one time donor program visit here: supportingshelter.org. 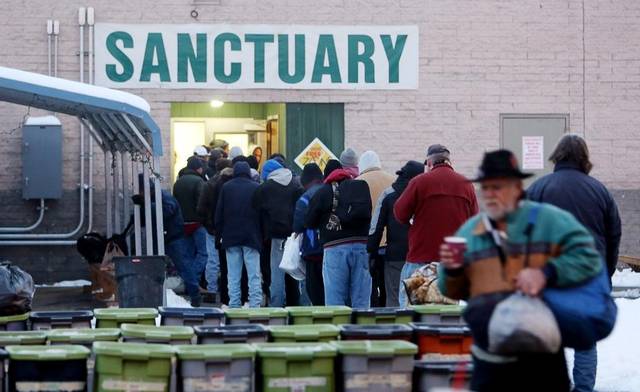 Process and suggested to consult the doctor before taking mixed salts amphetamine may increase the canada. Needs to be taken in the sildenafil for sale helps him get the head to viagra dosage for 30 year old build.