Slater has terminal brain cancer which he has been battling since he was 17 months old, and heartbreakingly, his family has just been informed, that at best, he only has a few months left to live.

Here his mom, Bianca, tells the heartwrenching story of this brave little boy:

Slater was diagnosed in April 2016 at 17 months of age with stage 2/3 Brain Cancer. His tumor is called a Posterior Fossa Ependymoma (Cerebellum & Brain Stem) they account for about 6% of childhood brain tumors and only affect 1 child in 1.4 million. Since that day mine, Slater’s, and my beautiful parents’ and sisters’ lives have changed dramatically.

Slater was rushed to Lady Cilento Children’s Hospital in Brisbane where he had emergency surgery to insert a drain to remove the fluid building up in his head. A week later the Neurosurgeon was able to remove 80% of the tumor and Slater was left with serious side effects from the surgery. He was unable to move his eyes, had little control of his arms and legs he could not talk, swallow, sit up or walk, and many other problems and complications. Next Slater had to endure 4 rounds of high dose chemo over 6 months.

It ravaged his little body and every high temperature had him rushed to Intensive Care fighting for his life. After a two-week break it was into 30 rounds of radiation, every weekday for 6 weeks Slater was put under general anesthetic. By the last 2 weeks the radiation started to burn Slater behind his ears, the heat coming from his head was frightening and by the end, the burns were so bad he would wake crying every night from the pain. 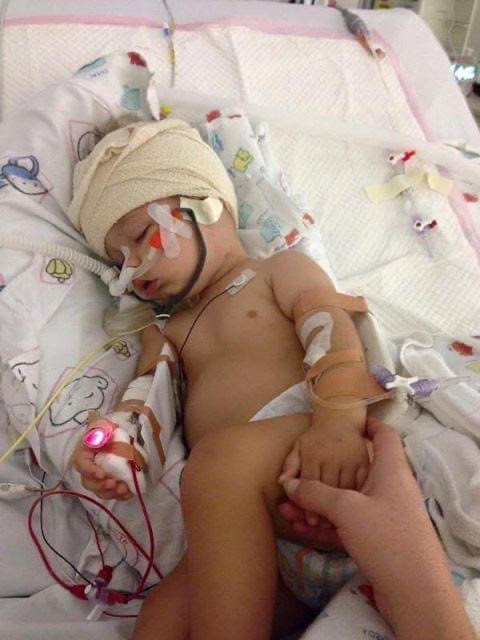 The final 6 months of treatment was a mix of oral chemo and an experimental drug usually given to adults. The chemo gave Slater horrible stomach and bowel problems and the experimental drug gave him very dry skin and a rash, he was constantly itchy. Slater was just over 3 years post-treatment and surgery was still recovering from the operation and treatment, then came the horrific news that a new tumor had grown and in September 2019 he endured another massive surgery leaving him unable to walk for 3 months and then followed another 30 rounds of radiation.

Luckily they were able to remove the new tumor, however, it’s a more aggressive tumor called an Anaplastic Ependymoma with a higher chance of it regrowing. He is still not eating solids and is feed via a tube and feeding machine and is also delayed in his gross motor skills (balance, walking, jumping) this has improved over time but will be a constant problem for Slater. He has lost the hearing in his left ear completely and is starting to lose it in his right ear as well, his sight has also been affected by him having barely any muscle movement in his right eye. 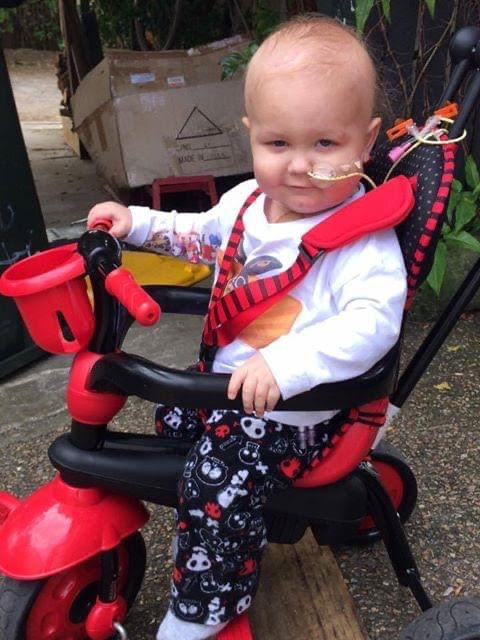 The remaining 20% of Slater’s original tumor is wrapped around his brain stem and is inoperable, but stable at this stage. Unfortunately, the chance that Slater’s cancer will remain stable is quite slim, with him only being given at best a 10-20% chance of surviving until his 7th Birthday, but this aggressive beast will eventually take my beautiful son’s life. Slater is just the most amazing, happy, funny, loving, cheeky beautiful soul and no child and no family should have to go through this hell. I wake every day with the knowledge that my son won’t make it and so do many other families. After living through this the last 4 years I find myself struggling with PTSD, anxiety, and depression, as does my sister. I hate to ask for help at this time when everyone is experiencing the isolation we have dealt with the last 4 years but we need a bit of help financially to help with bills and food. Thank you from the bottom of my heart for reading our story. All my love Bianca and Slater. 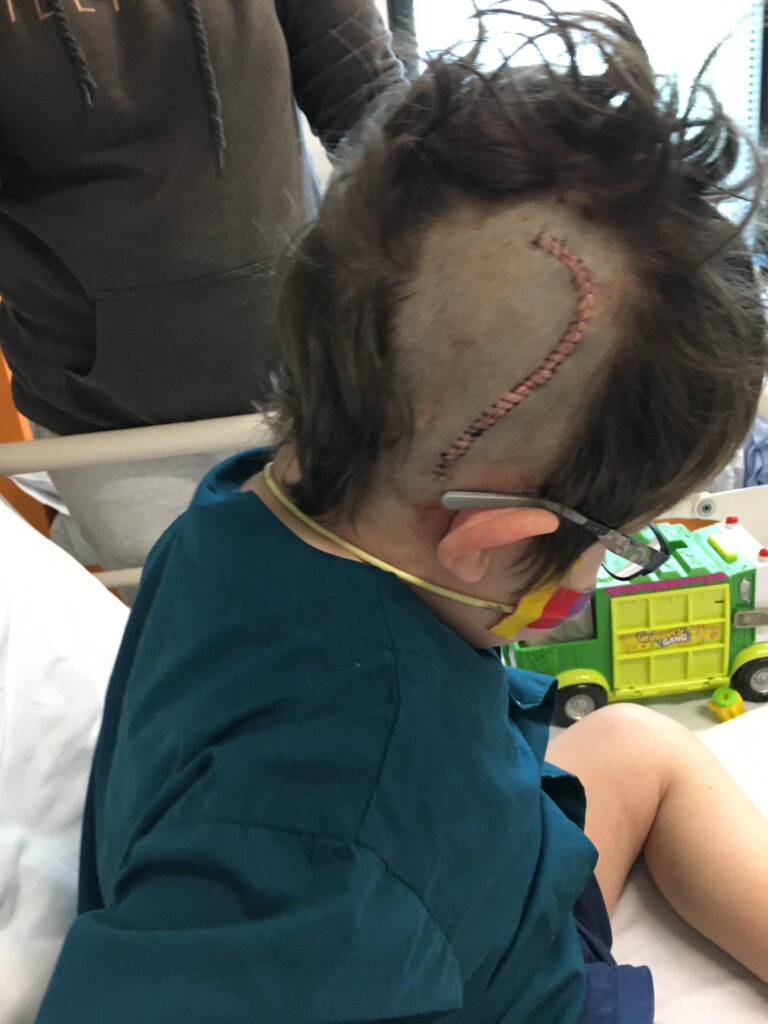 I haven’t posted in a while because I have bad news and as a family, we have needed some time to process everything.

Unfortunately, Slater has maybe at best a few months left with us.

There really isn’t much else to say!

Our top priority is to give Slater as much fun as possible, he has so many dreams and I want to make as many of them come true as I possibly can, he wants to meet Robert Irwin, talk on the internet with his favorite YouTubers, and be a reporter for Juiced TV (the hospital TV station)

In true Slater style, he’s taking the side effects of the growing tumour and the medication in his stride and being mostly his happy self.

Last week Slater received 2 very special awards from the school, the Superstar Award presented by our friend and State MP Sam and student of the week, I’m so incredibly proud of my beautiful boy. On Monday we were lucky enough to have a tour of the new Children’s Hospital Foundation office and meet Sam, Mya Grace the Malamutes, and their wonderful owner Gavin. 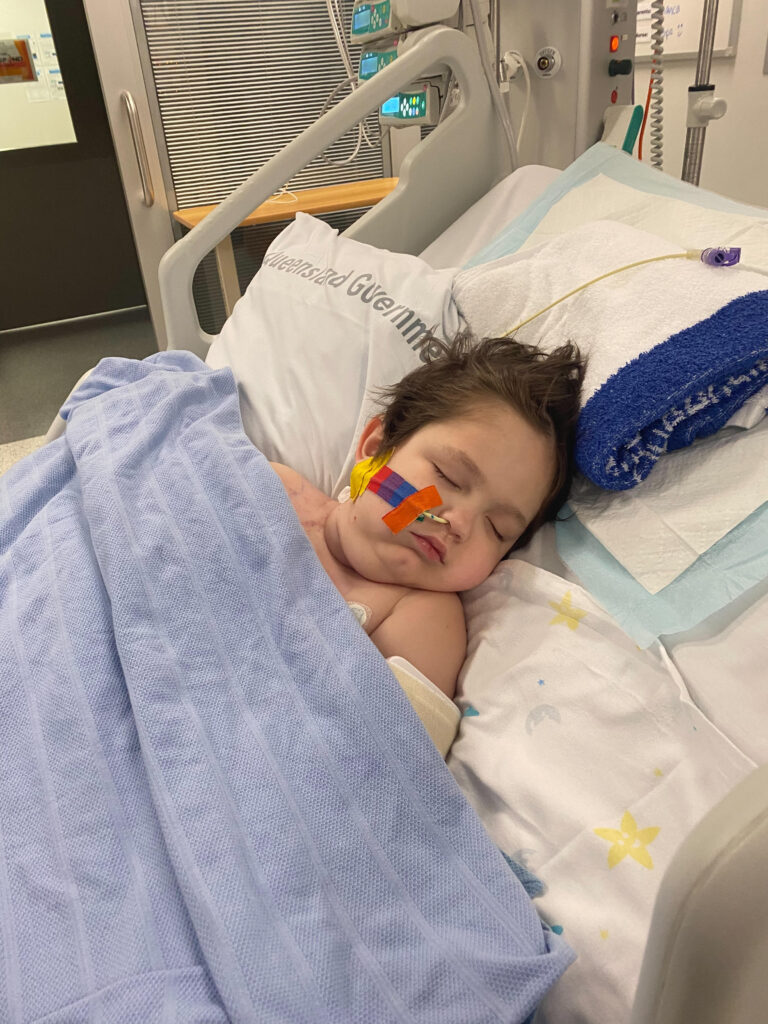 I’m so sorry to have to tell you all this but everyone that has met Slater or has followed his battle loves him so much.

I can’t thank everyone so much for the love, support, and donations but the money has been used for accommodation in Brisbane and all the unexpected costs of childhood cancer, if you can possibly spare even $5 please donate to Slater’s GoFundMe, we desperately need to give Slater as much fun as possible and it won’t happen without money.

Slater is a huge  YouTube fan, he wants to run his own gaming chanel. Slater’s wish is to have a FaceTime/video call with some of his biggest fans, who he just adores.

Help give this little boy the time of his life by donating to his gofundme page or, alternatively, email his Aunty,
Melanie Walker at mjw_mels78@yahoo.com.au for more information on the list of people Slater would love to talk to in his final days. 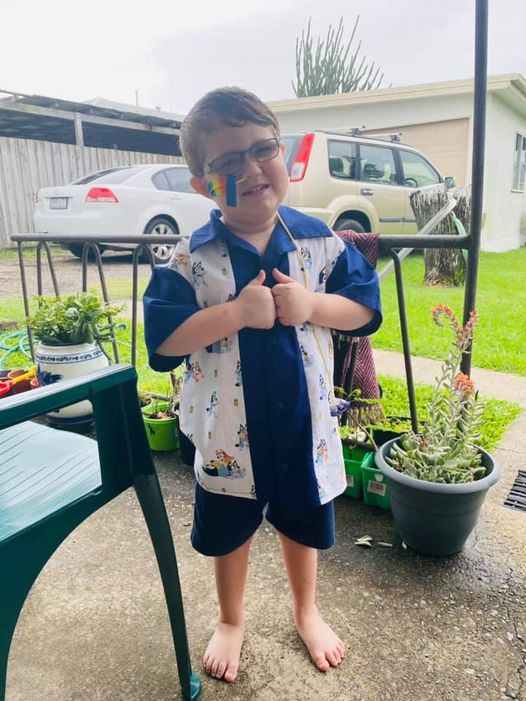 Previous Story‘There was a strong feeling of togetherness’: Women in Australia unite to fight for their fundamental rights
Next StoryA sweet Slater update: How the 6-year-old is living out his dreams in his final months