It was on October 22, 2016, that Carleigh Hager was so brutally beaten by Ryan Cameron (now her ex-boyfriend), that her road to recovery is a long, seemingly endless one.

“Carleigh and Ryan had returned home after celebrating a friend’s wedding. It was getting late and Carliegh was ready to leave, but Ryan wanted to continue in the festivities,” her gofundme page supporting her recovery page reads. “After arguing over leaving, they returned home and Carleigh went to bed. Ryan invited three friends over and began desparaging Carleigh to his friends. An argument between Ryan and his friends ensued and Ryan left the room. He went into the bedroom  where Carleigh was sleeping, locked the door and began strangling her. Ryan’s friends heard Carleigh call out and broke the bedroom door to get to her. Ryan began fighting his friends and pushed them out of the house and locked them out. The friends called the police and began trying to break through the front door. In the meantime, Carleigh had gone into the bathroom. Ryan followed her into the bathroom and began brutally beating Carleigh, slamming her head into the tub, biting wherever he could reach. He attempted to bite off her finger and the tip of her ear. He also attempted to rip her tongue out of her mouth.  He dragged her through the house, leaving a quarter sized opening on her forehead. At some point during the beating, Carleigh lost consciousness, eventually awakening  with a female officer standing over her, calling for an ambulance.” 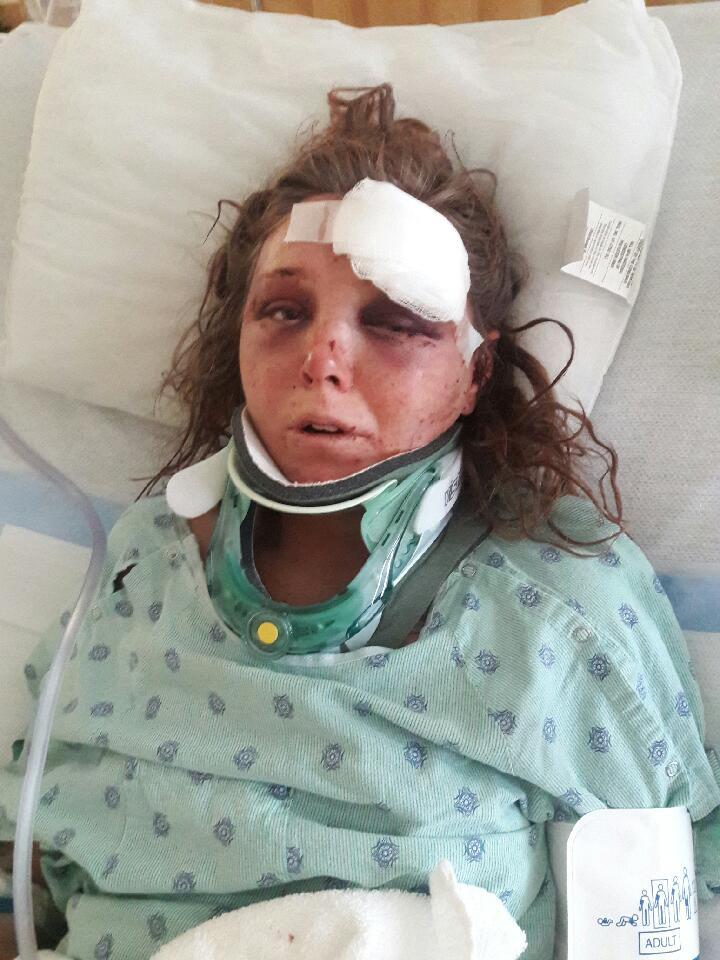 The description on the page continues: “Beyond the injuries already described, there were over 20 bite marks throughout her body. The severe beating also resulted in swelling and blood on her brain.

“Carleigh has an extremely long road to recovery ahead of her. It will be at least three weeks before she can eat solid foods due to the severe damage to her tongue. The medical expenses, prescription medications, physical and mental therapy, everyday living cost, etc. are going to be unreal. ” (To donate to Carleigh’s recovery fund, click here.) Despite the attention shone on domestic violence in the media arena, it’s still a largely, privately, shameful issue. Many women think they will never become a domestic violence victim, but it happens — and increasingly a lot.

In fact, in every minute, about 20 people are physically abused by an intimate partner in the U.S., according to the Centers for Disease Control and Prevention.

Domestic violence doesn’t differentiate between the rich and poor — take the high-profile cases of Ray Rice and Greg Hardy, and Chris Brown who have beaten their women, as examples.

Domestic violence victims are walking among us, hiding their shame, recoiling in the horror of what may have happened a week ago, a day ago, or a minute ago, and without the physical scars, it’s difficult to surmise that internally, they’re battling the physiological and emotional wounds that come from being a victim of abuse.

Andie Naar is one such woman. She’s bright, beautiful and sweet, yet her history is littered with violent relationships. She describes a life where abuse has been a common theme: “I was born and raised in Germany and moved to the States in 2008, by myself. I had have abusive, violent experiences since my childhood, so arriving in a new country seemed like a new start. Maybe even a rebirth.

“I had a great job offer in Manhattan and many new opportunities. Unfortunately I did not take my time to heal but began a new relationship. It was a roller coaster, amazing times with the highest high, but not too long into the relationship it became, yet again, the lowest lows and my heart was broken. I stayed in it for a few years and by then it wasn’t only my heart that was broken.”

It’s a story echoed by Pamela Manning, who was subjected to years of torment and physical and mental abuse. She describes this time as feeling like a “prisoner” with no way to fight her “way out” after the man in question took full control over every aspect of her life. Family and friends were cut out…. there appeared to be no one that could save her.”

Both of these women came to find themselves under the wing of Trish Steele and her non-profit organization, Safe Passage.

Safe Passage provides hope, opportunity, pride and empowerment to abused women and their children, leading them to a new and better life.

For Pamela, Safe Passage gave her “a new start by overcoming all the mental abuse, and physical abuse, by the grace of God and Godly counsel, I was able to start rebuilding my self-worth, like angels, safe passage help me take back was stolen from me.”

Safe Passage clients have a 95% success rate in breaking the cycle of domestic violence and creating a new life for themselves and this is not surprising, given the history of Steele, herself a previous victim of domestic violence, providing her with an insight into what these women really need to make a fresh start.

Of her own ordeal, Steele recounts: “I was living in fear that I would be destroyed so much that this thinking did not allow me to leave. This was my breaking point: It was the punch in front of my friend that got me out and made me realize that if I do not do something now, I will not get out alive. But please to do wait till that point to be punch or hit, for I was one of the few that survived the punch to get away.”

It was left to a doctor, three years later, to repair Steele’s face and at that point she realized it was time to pay it forward and help other victims, and thus, Safe Passage was born.

“We have a unique program that heals from the inside out,” Steele explains. “The Counseling is the main transformation along with the one on one mentor-ship that understands the victims loss. Linda Dolson (Counseling) and I have been in.” Her organization has provided women with hope, who previously had none.

“I was given a bit of hope and a new outlook on life,” says Rebecca. “I had been attending church with Trish and Jim Steele when I was offered the opportunity to get involved with Safe Passage. I began therapy sessions and attending classes that focused on rebuilding my life. After meeting several other women that have been in abusive relationships, I am inspired to give life another chance. I have been too afraid to truly open up and wholeheartedly accept the gift that Safe Passage offers. Yet, I find myself involved in the program and daily putting forth the effort to be a part of my own recovery. Something buried deep inside desires to live life again and not just exist.”

And Victoria has the same inspirational story to tell.

“I graduated from Safe Passage’s 6 month program, after which, I became a volunteer,” she says. “I have been volunteering weekly for Safe Passage for more than one year now and will continue supporting Safe Passage in any way that I can, even after I regain my kids back. My goal is to be able to help other mothers who are in my situation, reunite with their lost kids.

“Traditional Nature Path, Linda Dolson, our Program Director was the one who helped me restore my personal strength, reconnect myself with God and have faith that my kids and I will soon be together. The mentoring and therapy Linda provided is priceless and very unique. She helped me understand the deep patterns I had inherited during childhood and how that had affected my decisions. Most importantly, Linda showed me how to change those patterns and rebuild my life, be a better human being and a great mom.

“Safe Passage empowered me tremendously and changed my life for the best. I became a Certified Life Coach so that I can help my sons once I get them back. And, I have a full time position as an Executive Recruiter with DNA Search. I would not have been where I am today if it was not for each and every woman I met through The Program. I feel blessed. I feel strong. I am grateful for all the opportunities I received because of Safe Passage.”

Steele’s desire to radically transform the lives of domestic violence victims is by no means complete.

“Our plan for this year and next year is to establish a Resale Clothing Boutique,” Steele explains. “This will bring in income to cover the cost of the “Steeping Stones to a New Life” program that all the women and children and some men go through for one year. Fundraising these days has become tiring to the donors and the charity. Looking for people who want to invest their time and funds to this unique Boutique Store that will train and equip our clients for the workforce.”

As for anyone currently embroiled in a domestic violence situation, Steele implores: “You are not in fault of the abuse. You deserve respect and you must make that decision yourself.”

For a woman whose full-time job is to spread Kindness & Hope, what do those words mean to her?

“Kindness and Hope are the substance of love,” she says. “We at Safe Passage give you kindness with understanding, hope to a new future free from abuse and care enough because of the love of God that is in our heart.”

To learn more about Safe Passage and donate, click here.

Previous StoryBattered & Broken: The Plight Of Female Vets & How Their Ordeal is Helping Others
Next Story1027 days and counting, It's time to end this… #bringbackourgirls