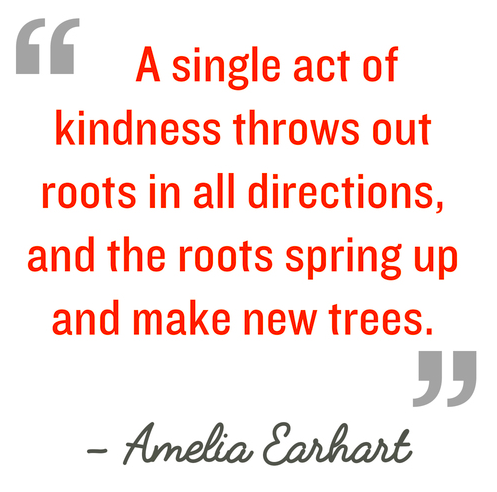 When I was growing up, most years around Christmas-time my dad would coordinate being matched with a single mother who was living in a shelter or otherwise getting government support to survive and our family would take her and her children out for a day in NYC. The itinerary was usually the same, lunch at McDonalds, where everyone was kind of shy and quiet but the kids were delighted by their Happy Meals, shopping, for necessities likes socks and underwear and then toys for the kids that I’d have balked at, but they acted like were the best thing they’d ever received. And they might have been. Then we went for dinner somewhere like TGI Fridays, less apprehensive of one another and elated from a fun day, everyone was much more boisterous.

We weren’t ending hunger or solving a major problem. We weren’t spending an amount of money that would change even this one family’s long-term situation, but the lessons and impact this day that my dad made my favorite enduring family tradition was a gift in itself.

For the families we took out, it gave them a day treated like they were treated as a friend, rather than looked down upon because they needed help.  It gave them a day to put aside their problems, go to a restaurant and enjoy a meal like anyone else. It allowed a mother the satisfaction of giving her children gifts at Christmas and hopefully gave them hope that there’s some good in the world worth fighting for as they were going through what was likely their darkest days. For my family, my sister and I were exposed to life outside of our suburban bubble, we saw how much others appreciated what we often took for granted, we learned that helping others feels good for everyone, and the sparkle my dad would have in his eye (because he was a truly selfless and amazing human) and smiles on all of our faces are memories I’ll never forget. 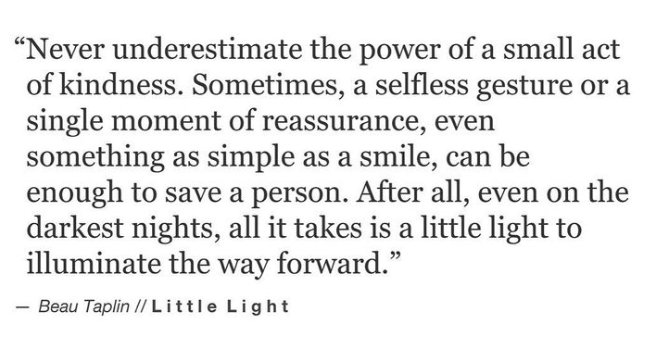 After my sister and I went away to college the tradition went away too. The city tightened security so the agency that set us up with a down on their luck family didn’t do that anymore. My dad had degenerative nerve damage and couldn’t walk around all day in the cold and my sister and I spent our days during break visiting friends and vegging out.

Cut to years later, I’d graduated college and moved back to New York. One Christmas I decided I wanted to volunteer in a soup kitchen. My friend said she’d stay in the city rather than going to her parents and do the same. I called every soup kitchen, every shelter, every mission and the answer was the same, “We’re full.” One actually went further to ask, “Where are you the rest of the year?” and told me, “Everyone wants to help on Christmas to feel good about themselves, people need to be fed all year.” I was taken aback. Where was I the rest of the year? Working. Although, the person did have a point and I understood the frustration they must have felt. 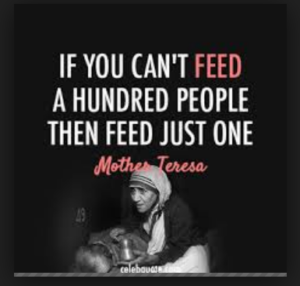 Undeterred, my friend and I decided to make 50 peanut butter and jelly sandwiches and round up some blankets and walk the streets of NYC feeding people ourselves. It was a cold Christmas so it took a while navigating the icy streets before we found many, but when we did, they were really grateful. Well, most of them. Some people complained they rather have turkey, or said they didn’t like peanut butter. As the day went on, friends joined and when we discovered a large contingency of homeless people seeking shelter in Penn Station, a producer friend of ours bought buckets of Kentucky Fried Chicken for everyone. Generally a serious person, it was as amazing to see the smile the act of kindness brought to his face as it was to see the happiness it elicited from the recipients of the hot meal.

This is a tradition my sister and I have since continued. 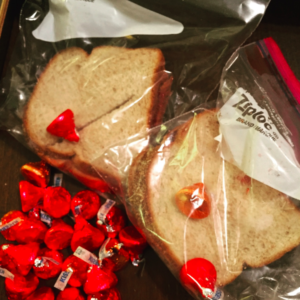 Once a year, either Thanksgiving or Christmas, we make 50-100 sandwiches (now including a couple dozen turkey), put them in a bag with a small bottle of water, a Hershey kiss and this year a banana and mini banana bread muffins (because ordering online from Costco we were overzealous on our banana ordering!) and a note that says Happy Holidays. Then we walk the streets of NYC handing them out.

Last year a homeless man who often holds court in the Union Station subway station said, “You’re the kiss sisters!” after we offered him a sandwich bag. “The ones with the Hershey kisses in the bags. We know you and we look out for you. You don’t see us, but we’re always there.” What goes around comes around.

Each year we refine what we do a little more. This year we did a lot of traveling just before the holidays and had a pile of toiletry bags from all the flights we took with soap, toothbrushes, toothpaste and basic general hygiene samples. We brought those with us and they were more popular than the food. Next year we decided we may replace spending the day making PB&J and instead order a bunch of bulk toiletry bags and some non-perishable healthy snacks, along with a water and a Hershey kiss, and go out a few days before the holiday, because as I’ve been reminded, people aren’t just homeless and hungry on holidays.

*This post is dedicated to my dad, for instilling in me the parts of myself I like best, the part of me that gets out of the house on cold Christmases to feed the homeless – with a smile on my face. 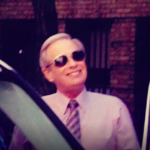 Jennifer Birn an LA hyphenate - writer/journalist/publicist/marketer/strategist. After more than a decade writing for newspapers and magazines she tired of Keeping Up with the Kardashians and turned her attention to writing a fiction novel with Dhani Jones (stay tuned), launching brands, figuring out how to get clients from goals to execution and weaving an aspect of social good into nearly all that she does. When not working reading, writing or brainstorming, you can probably find her on an airplane, hiking, doing yoga or enjoying a glass of wine with friends.

Previous Story‘He started kicking me and spitting in my face’: Homeless woman across the pond reveals the perils of sleeping on the streets
Next StoryThe only Valentine’s Day story you need to read